IntiGames gets off to a flying start

IntiGames, a young, dynamic Rotterdam company specialising in innovative game ideas, was keen to launch its first product — the Helix — at the Speelgoedbeurs trade fair. It is a beach game based on badminton and beachball that combines the best of both worlds. Just one hitch, though: the shuttle for this game was easily damaged. Working with IntiGames, Voges developed a transparent wrapping for the Helix that can stay on it permanently and that gives it optimum protection.

The Challenge
Protect fragile components
The innovative design of the Helix did mean that a few of its components were easily damaged and that there were tiny parts to be kept together — not just in the store, but above all during actual use on the beach and in transport to and fro. So the wrapping would have to be sustainable and permanent, not disposable. And it had to be produced pronto, because the trade fair was just around the corner. IntiGames needed a proposal to be with them within the week.

Our Solution
Prototypes ready in a single week
Having the full range of expertise in house means we can respond quickly. We kept in constant contact with the client while we came up with the design: IntiGames' developers supplied us with their 3D drawings, we aligned our 3D CAD design with those and took it straight from there into development. We had our 3D CAM prototypes ready within a week. The resulting blister pack is one that holds all the components of the Helix neatly in place in the box: maximum protection for transport and use on the beach.

The result
Delivered to game store chains
The Helix ended up with a crystal clear holder to show it off. For optimum protection of all its components, we went for a clamshell packaging design that closes with a click. This game went down so well at the trade fair that IntiGames won contracts for supplying the Helix to major game store chains. The packaging also gave IntiGames an innovative solution to the issue of protecting the components and making the packaging reusable. 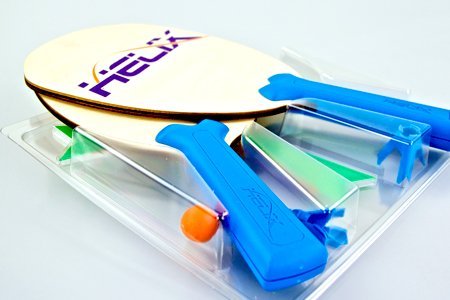 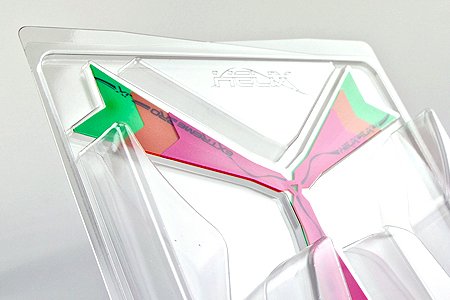 Syngenta's sprouting trays made to fit the client's business

Syngenta Seeds, one of the world's biggest seed suppliers, was wanting to put an end to its reliance on injection-moulded trays for the sprouting of seeds of some of its crops, including the cabbage family, barleys and tomatoes. This was a material that had seen its best days. Working with Voges, Syngenta Seeds came up with new sprouting trays that were a perfect fit with their business.

The Challenge
Has to match the client's business model
Apart from the risk of toxicity from the rinsing of this material, the dimensions of trays simply didn't match those of the sprouting cabinets. Even worse, the trays were attracting condensation — not conducive to sprouting. So Syngenta Seeds asked us for an alternative.

Our Solution
Single-use recyclable trays
After a thorough fact-finding stage, we developed a thermally-formed sprouting tray, coated in anti-fog foil to prevent condensation. Syngenta Seeds sends these trays back for recycling after each individual use. This affords maximum respect to the environment and means that the trays don't have to be rinsed or stored: a boost to hygiene.

The result
Sprouting trays that are not just green but efficient
Using our trays, Syngenta Seeds has significantly increased the efficiency of how it does business. The trays are an exact fit in the company's sprouting cabinets and there is no condensation. The single-use, recyclable design means little storage space is needed and removes the risk of toxicity. 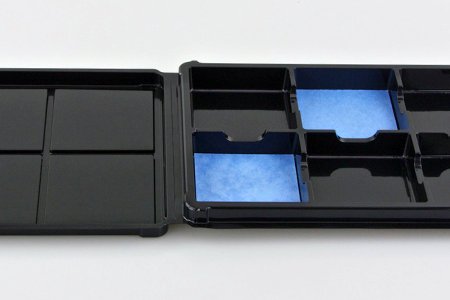 We developed new polystyrene growing trays and transport trays for Butters Group within the space of four weeks. To save time, we mutually agreed to skip the prototyping phase — a testament to the degree of trust the client placed in us. And we didn't let them down! We delivered the trays within a very tight production time frame.

The Challenge
Find an alternative to EPS
Butters Group, a market leader in plants and bulbs in the UK, delivers predominantly to supermarkets. They had been using EPS trays for transport, but these are non-stackable and so take up a lot of space. It had got to the point where they couldn't store the 260,000 trays they needed. What's more, EPS is inflammable, giving them headaches with their fire insurance. Butters Group asked us whether it would be possible to deliver them an alternative within four weeks.

The Solution
Skip the prototype phase
When you're asked to deliver on the double, this calls for good judgement of which corners it is safe to cut. This did not at all mean we were incurring major risks, because we have since produced transport trays in all shapes and sizes. But even so, clients — justifiably — do mostly have more confidence if they can lay eyes on a prototype before giving the go-ahead for production. Butters didn't feel this was necessary, as they knew what we were capable of delivering and had real trust in our quality and our methods. By removing the prototype phase from the planning, we were able to slash production time considerably.

The Result
Production within four weeks
So we managed to go from design right through to production of our thermally-formed, stackable growing and transport trays in just four weeks. The first production run has been in polystyrene but in time we will be making the move to 100% recyclable PET. These trays are easier to use, both for Butters Group and for the supermarkets they deliver to. The perforations mean that the trays can also be split up into smaller units. 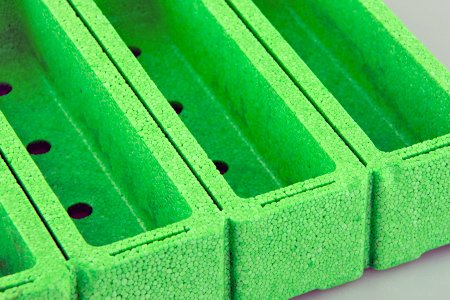 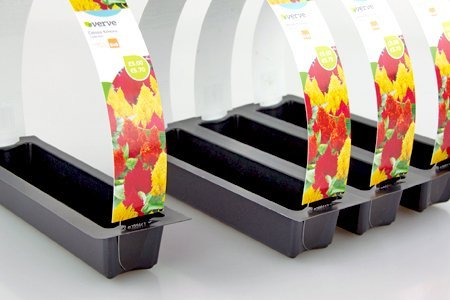 The perforations mean that the trays can also be split up into smaller units.